Is french onion soup healthy? This dish is ready to eat within an hour and full of healthy ingredients that your body needs. This Healthy French Onion Soup will satisfy any craving, the savory broth, sweet onion, and gooey cheese.

One of the goals of this blog is to come up with recipes that can be done in a simple, straightforward approach. The French onion soup is one of those recipes.

When I first made this soup, it was so simple that all of my friends were like, “Oh man! This is easy to make.” But is french onion soup healthy?

I’ve found this to be so easy that I could make it for a weeknight dinner and have myself some tasty, flavorful soup on cold nights after work.

I’ve always loved french onion soup because it’s got this incredible flavor and texture combination. Plus, you can’t forget the crispy bread on top with all that gooey cheese.

Whenever I go to a restaurant, it’s tough for me because they always mess up the soup. It tastes too sweet or not salty enough, so I tend to avoid ordering it when we eat out.

But now, I can whip up my favorite dish any night of the week. Woohoo!

This recipe is so easy and quick you’ll never need to make another again.

This makes me happy.

This french onion soup is perfect for a cold day. It’s time to make yourself some.

Don’t let the cold get you down. The best way to beat it is with some gooey cheese.

And don’t forget to comment if you want some recipes for any of your favorite comfort foods that might be hard to make.

French onion soup: What is it? Is it healthy?

French onion soup has been around for a long time, but it’s still delicious. The flavor is too good to resist!

This dish contains a few of the following ingredients:

In France, cheese and bubbly wine are usually served with a French onion soup. But the question is: Can this dish be healthy? And it turns out that there’s a way to make sure you’re doing it right. 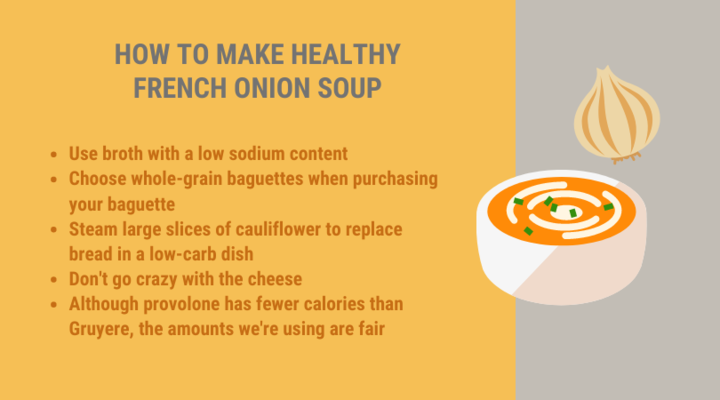 How to store and reheat French Onion Soup?

For storage, remove the bread and cheese from the soup before storing it in an airtight container. The onion soup will last for up to 4 days when stored this way.

To reheat, warm up the broth and add some bread. Put it under a broiler to get that deliciously browned cheese.

Defrost overnight in the fridge.

Warm up the soup, add cheese and bread to toast in the oven until browned on top. Eat!

I like to use yellow onions for French onion soup because they become sweeter the longer you cook them. They are the perfect choice for this recipe.

Vidalia and Walla Walla onions are not just great for salads; they also make an excellent addition to any dish. You can use red or white onion if you don’t have Vidalia on hand.

To make the soup vegetarian, use vegetable broth instead of chicken and beef. To go a step further and make it vegan-friendly as well, substitute:

To make this soup gluten-free, use gluten-free bread instead of a whole wheat baguette. You can also substitute cauliflower for the sandwich to achieve a similar taste.

If you are going to be buying the beef and chicken broth, make sure that it is gluten-free.

What can perfectly go with French onion soup?

With this French onion soup recipe, you’ll be enjoying a rich and hearty meal that will leave your guests satisfied. It’s also perfect as an appetizer for beef roast or roasted chicken.

And, it’s an excellent accompaniment to any salad with balsamic vinaigrette or spinach.

Healthy French Onion Soup is a savory, sweet soup that takes less than an hour to make and will leave you feeling satisfied.

Add beef broth, balsamic vinegar, thyme, and salt to a pot. Bring it up to the point where it’s simmering.

Place 2-3 slices of bread on top, followed by a piece of cheese.