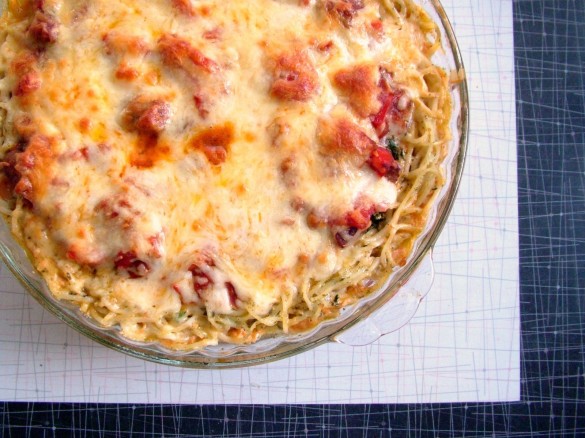 Let me clarify: chocolate-dipped cheesecake pops are not something I would typically make for dessert on a plain old Monday night. I made them for the Eyeopener because tomorrow I’m going to chat about food blogs. Thinking I’d choose a recipe from one of my favorite sites, I hopped around a few and found that Cream Puffs in Venice, Tartelette, and another blog I stumbled through were all posting cheesecake pops. As I was perusing them my friend S emailed from Whistler, where she is apparently hooked on something from the local chocolate shop called cheesecake bombs. I took this as an unmistakable sign that I should make some. What a hero I’m going to be in the studio tomorrow morning!

The pie was to make use of leftover spaghetti; I did a few segments debunking common cooking myths on BT this morning, and as a result had plenty of leftover cooked pasta that was used to demonstrate the myth that adding oil to the cooking water prevents it from sticking together. (It’s a large volume of water, kept at a rolling boil with space for the spaghetti to move around, that keeps it from sticking. In fact, adding oil to your water will result in an oil slick on your pasta once you drain it, and your sauce won’t stick very well.)

I’ve seen many versions of spaghetti pie, some in which the pasta is tossed with the sauce and cheese, then baked, others that have the crust par-baked first to crisp it up, and others with layers of cottage cheese between the noodles and sauce. So I improvised: tossed the leftover spaghetti with some egg white (I had some whose yolks had been used to make lemon curd), a bit of grated Parmesan, a grinding of pepper and a big spoonful of pesto, just because there was some open in the fridge and W is such a fan, then spread the spaghetti into an oiled pie plate, pushing it up the sides a bit. I had requests for spinach sauce, but had hastily crumbled and cooked a couple lean Italian sausages, a red pepper, a few fresh tomatoes that had gone too wrinkly for anything but cooking with and a can of tomatoes before remembering this, and pureed sausage, I imagine, is not a Good Thing. So I decided to proceed as if it were a lasagna – I crumbled some ricotta and thawed, squeezed-out spinach over the crust, topped it with the sauce… and some grated part-skim mozzarella, and baked it at 350F for about half an hour, until all was golden, crispy-edged and bubbly. Yum.

The cheesecake pops were simple, really, mostly because I didn’t make the cheesecake from scratch like the others did. Some advised making a cheesecake and then scooping up balls of it with your hands, freezing them and then dipping the frozen wads in chocolate. Because I couldn’t envision blaspheming a cheesecake that way, nor attempting to cut one into teeny fancy shapes using a cookie cutter (too thick for any in my collection) I decided to buy one of those small plain frozen Safeway cheeesecakes and cut it into wedges. It worked perfectly. After inserting the sticks (bamboo skewers, although popsicle sticks or the 4″ lollipop sticks you can buy at Michael’s would work brilliantly), I put them back in the freezer to solidify while I melted some chocolate chips in the microwave, then half dipped, half spread the melted chocolate onto the frozen wedges. Some sprinkles or other decoration would have worked out well, but I didn’t really have anything. That’s the beauty of radio; you don’t really need to accessorize.