I always refer to chemistry as “cooking’s evil cousin,” but the truth is that chemistry definitely has its place in the kitchen.

When you make a batter, a cream, or any other mixture that contains both liquid and fat, mixing the molecules in the concoction can completely change the texture and taste of it.

You can accomplish this effect by hand, but it’s very labor intensive and takes a long time. By far the best way to do it is using a hand mixer.

I use hand mixers all the time in baking and dessert preparation, and I’ve poured over specs and reviews for more mixers than I can count.

In this post, I’ll talk about handheld mixers and what makes them great tools, and I’ll even discuss the seven best hand mixer models I’ve come across.

I’ll give my hand-picked recommendations in the next section, but first let’s review what you want to look for in a hand mixer before you purchase it.

What to Consider When Buying a Hand Mixer

It’s important that a mixer has at least five speed settings. That’s because higher mixing speed is not always better. Mixing something at a higher speed than required will usually result in some ingredients splattering out of the bowl. Over-beating mixtures can also cause the ingredients to break down too much on a microscopic level, turning the mixture into liquid. You want to use:

IMPORTANT: No matter what speed you mix at, start off on low speed and gradually work your way up to the desired speed, like shifting gears on a car. Not doing so will result in undue strain on the hand mixer motor.

Hand mixer attachments are the replaceable mixing tools that come in the box, and each kind specializes in beating a different kind of food. Strip beaters are the most commonly-used attachment and often come pre-installed on hand mixers, but they really excel only at beating eggs or other thick liquids. Other attachments include:

You want to make sure the beater includes other attachments you may need. Of course, which ones you need depends on what you like to cook.

Some mixers are way too hard to clean. The attachments should be detachable and dishwasher-safe, and the base should have a relatively smooth and water-resistant surface so you can easily wipe it down with a damp rag after using it.

Mixing at high speeds requires a powerful motor, especially if you plan to mix thicker concoctions like batter or mashed potatoes. Make sure that the motor in the hand mixer is at least 250 watts, and at least 350 watts if you plan to use the mixer in heavy-duty baking.

Since you have to hold a hand mixer the entire time you’re using it, getting a relatively lightweight one is especially important. The absolute heaviest hand mixer I will buy is four pounds, and even that’s pushing it.

Stand mixers are countertop devices that include a metal bowl and a base with beaters that will mix anything placed in the bowl.

The effect is much like a hand mixer, but it is hands-free, which can be really nice when you need to beat whipped cream into stiff peaks or carry out another mixing task that takes a long time. That added convenience is the upside of a stand-mixer, but hand mixers have upsides of their own.

Since you control your hand mixer, you can move it around in the bowl to unstick ingredients from the side of the bowl or to mix specific spots that need it.

Hand mixers are also easier to clean and store. Last but not least, hand mixers are generally much more affordable. I prefer hand mixers, but obviously it’s a matter of personal preference.

Without further ado, here are my picks for the best hand mixers on the market. I put each of my picks into a category, as shown in the table below. Underneath the table, I go into a bit more detail about each model. 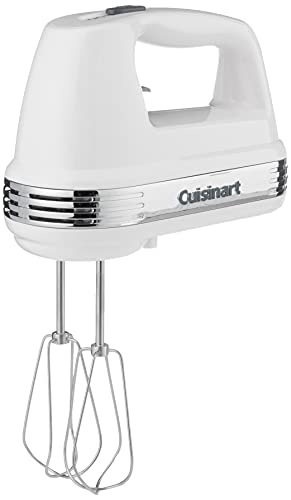 This model just does everything you need an electric mixer to do, and it does it well. It has five speed options, a powerful motor, well-designed beaters, a durable construction, and a classic but attractive design.

There’s nothing too remarkable about it, but I really do think it’s the best hand mixer out there because it’s a good price for a mechanical kitchen appliance that will do an above-average job for many years. 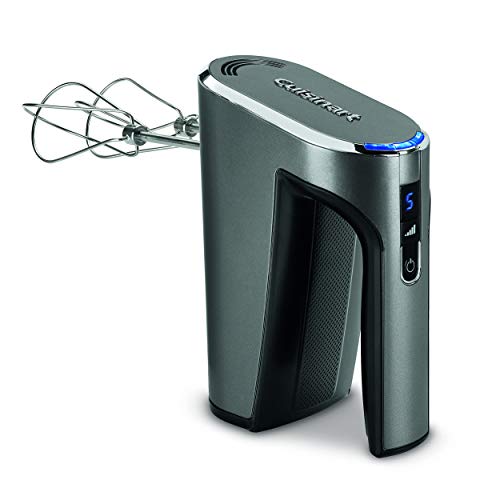 Going completely cordless is a very liberating feeling, especially with a device like a hand mixer that you hold constantly and can move around the mixing bowl to make sure everything is evenly blended.

The handheld mixer is also nice and light at just one pound, so its maneuverability is off the charts. That’s why I love using this mixer, which has a 7.4-volt lithium ion battery that you can charge via USB. Runtime is only 20 minutes, but that’s more than enough time to mix ingredients for a recipe. Besides, the mixer only takes 20 minutes to recharge.

The device looks amazing, too. It has a futuristic-looking black and gray design with a few blue lights that activate when it’s on. It also has a beautiful LCD screen that shows the power setting (there are five total) and remaining battery level. Seriously, when I use this I feel like I’m holding a device out of Star Wars.

Unfortunately, the power on this model is pretty meek compared to the competition. It’s undoubtedly a result of it running on battery rather than electricity, but that doesn’t change the fact it has trouble mixing even thick mashed potatoes, and you can forget about mixing thick doughs for baking.

It’s best for combining dry ingredients or thick liquids, so the fact that the only attachments included are whisks (which are good at lighter-duty beating tasks) isn’t really that much of an issue. 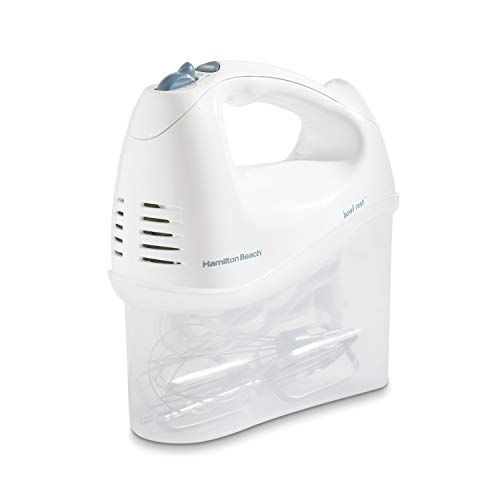 For the price, this thing is a steal. It has a decently powerful 250-watt motor and six speeds, which is slightly above average.

It also has some nifty features like a storage case that attaches to the base and keeps you from misplacing the beaters and a bowl rest that lets the hand mixer sit on the edge of the mixing bowl rather than on your countertop.

It only has two sets of attachments, beaters and whisks, and it looks sort of cheap and plastic-y, but what do you want for the price of an entrée at Outback Steakhouse? 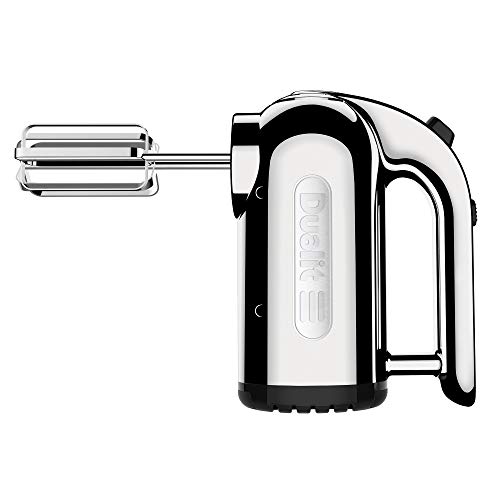 The only reason I say this model is best for “newbies” and is not the best overall electric mixer is because, for some reason, it only has four speed settings. Which is a shame, because other than that it is an absolutely amazing product. Let me list some of my favorite features.

It’s not as cheap as some handheld mixers on this list, but you can see why when you use it. I just wish it had another speed level or two and it would become my overall pick for best hand mixer. 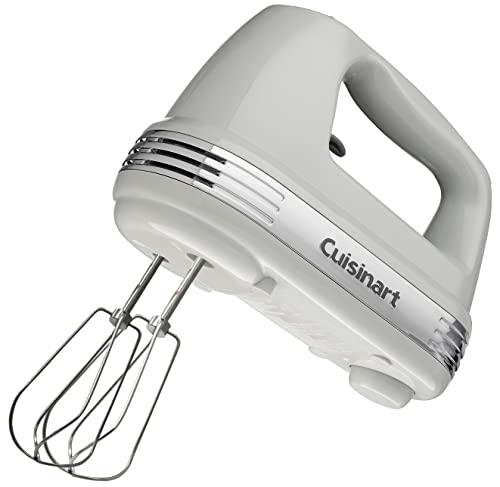 I still can’t explain how this electric mixer manages to muster up so much power with the 220-watt motor. From the moment you pick it up, it just feels powerful, with its considerable heft, sturdy construction, and a design that would look at home in an industrial kitchen. It mixes incredibly well, too.

I wouldn’t necessarily recommend mixing gooey cake batters with it, but the motor chugs through things like mashed potatoes and thick frostings without slowing down.

My only complaint is the speed settings. It has seven of them, which on one hand is a good number but on the other hand is a strange number. To me at least, it seems kind of random and non-intuitive.

Also, the manufacturer claims that the lowest speed setting is slow enough to mix up dry ingredients like grains without them being sprayed out of the bowl. It’s not true, though; the lowest speed level is actually pretty fast. 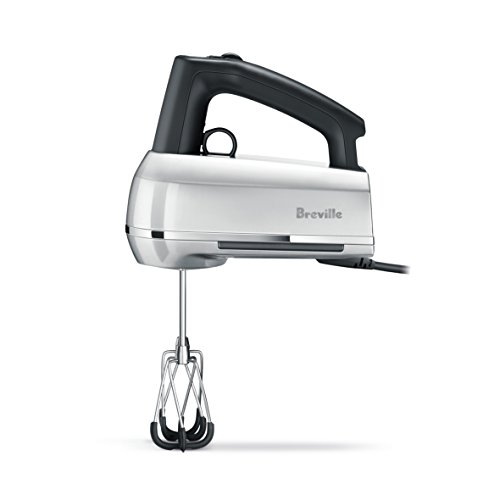 Even though it has nine speed levels, this model is very quiet during operation. One reason for that is the rubber coverings attached over the tips of the included beaters, which allow you to scrape the bottom or sides of your mixing bowl to dislodge ingredients without making much noise.

And I don’t know what’s going on inside the electric mixer, but it keeps the motor nice and quiet so you can operate when people in the house are sleeping early in the morning or late at night.

Speaking of operating the hand mixer at night, I love the mixing light that shines onto the beaters and allows you to see your ingredients clearly during the mixing process, even in the dark.

Along with the LCD screen on the back of the beater that shows the current mixing speed level and the time, as well as the glossy brushed chrome finish, the device definitely screams “luxury” – hence the very high price tag. The handle is ergonomic and comfortable to hold, too.

This hand mixer is the best at multi-tasking for two reasons.

Second, because the advertised slow start feature actually works, meaning you don’t have to manually creep up the mixer speed until you’re at the appropriate one.

The mixer also looks great, with five attractive glossy colors to choose from.

I just wish it had a bit more power; 108 watts is pretty feeble, especially for such an expensive model.

No. Every hand mixer brand has different standards and it’s unlikely a given part will work with different brands.

What can you make with a hand mixer?

Some popular concoctions to mix with an eclectic mixer are:

How do you shred chicken with a hand mixer?

After cooking chicken breasts, tear them into large pieces and put them in a big bowl. Press a beater in your electric mixer down on one of the large chicken strips and turn it on low speed. The beaters will drag the chicken through them, shredding it.

Pro tip: Only shred two chicken breasts at a time or the chicken may fly out of the bowl. This might mean doing more than one batch.

Can you use a hand mixer instead of an immersion blender?

Yes. Immersion mixers are a faster and more convenient way to whip eggs or cream, but a hand mixer will have the same effect and may actually result in a fluffier end product.

Electric hand mixers are huge time-savers in the kitchen and make some of my favorite foods (like whipped cream and meringues) possible.

Now that you know some of the best ones, go out and get your own or add another to your collection!