You may have heard that it’s really much healthier to eat six smaller meals a day than the three big meals we all know of. Unfortunately, most of us can’t adhere to this more metered food schedule.

Preparing meals takes time, and we just can’t cook six times per day. Because of this, having a handy machine like a Belgian waffle maker that can turn out thick, crispy, delicious waffles in just minutes is actually a good way to clean up your diet.

It won’t guarantee you six meals a day, but at least it’s a quick and convenient way to add a small but scrumptious brunch!

What is a Belgian Waffle (And Why Are They So Delicious)

What makes Belgian waffles so special and how can you make them effectively?

What is the definition of a Belgian waffle?

A Belgian waffle is somewhat like a regular waffle but with bigger and deeper squares than normal waffles. This fact lets Belgian waffles hold more of the stuff that is generally poured inside the squares – usually syrup, butter, jam, or cream. For many people, that “filling” is their favorite part of eating waffles, hence the popularity of Belgian waffles.

Belgian waffle recipes are generally lighter and airier than regular waffles as well, with a higher amount of baking powder used to make the waffle rise when cooking.

Not necessarily! High quality butters, maple syrups, and jams are actually healthy! As long as you don’t skimp in the condiments section, loaded Belgian waffles can be a great fuel for your body to get through the day.

Do you need a special waffle maker for Belgian waffles?

Yes. As I mentioned, Belgian waffles rise more during cooking, and normal waffle makers don’t allow space for the waffles to do that. This extra leavening gives the waffles a lighter texture than normal waffles, and it also makes the “pools” in the waffles deeper so they can hold more of the toppings.

Belgian waffles are usually larger than regular waffles in terms of diameter, so Belgian waffle makers tend to be bigger.

What should I look for when buying a Belgian waffle maker?

In this table, I go through what I think are the six best Belgian waffle makers out there. I like them all for a different reason, so I’ve categorized each one according to why it made the list.

Think of it like the Oscars, but instead of actors and movies it covers Belgian waffle makers.

Below, I give a bit more information about each of my best Belgian waffle maker picks and why it won its category. Think of that part like the Oscar speech.

This one’s not cheap, but it’s my personal favorite because of how much it lets you customize your waffles.

After pouring your batter in, you can choose from four waffle presets: Belgian, classic, chocolate, or buttermilk. You can then use knobs on the display to tweak what darkness you want the waffles to be, from creamy yellow to deep golden brown.

Using an amusingly-named technology called Waffle IQ, the device calculates the perfect heat and cooking time and gets to work. And you can’t argue with the results: the waffles have come out evenly cooked and delicious every time I’ve made them.

Besides the customization options, this is my pick for the best Belgian waffle maker in my kitchen. It’s nice and compact, but it can still cook four reasonably-sized waffles at once. There is also an included dosing cup and cast-iron cooking plates that make cooking and clean-up easy and mess-free.

If you’re a superfan of Belgian style waffles, this is the device for you. 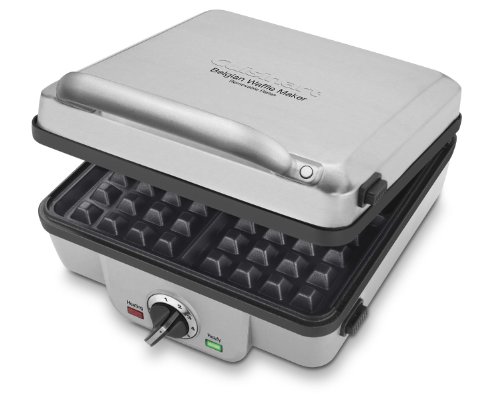 This model comes with a cast iron plate you can slide into the waffle maker to turn it into a pancake maker. It’s as easy as that. You can then cook four pancakes at a time.

When I’m making brunch for the whole family, I whip up two batches of waffles (4 waffles per batch) and two batches of pancakes (4 pancakes per batch), and the transition between the two is seamless. You can even use the waffle batter as batter for pancakes, although pancake batter shouldn’t be used to make waffles.

The Belgian waffle maker is otherwise similar to the first model I mentioned, although it doesn’t have as many customization options – only five darkness settings instead of four presets and 12 additional darkness settings. It is less than half the price, though, which certainly means something to cooks on a budget.

This waffle maker is round and is divided into four waffle plates, which means the resulting waffles are triangle-shaped (one quarter of the circle).

And as silly as it may sound, I find the waffle triangles surprisingly convenient and portable. You can just fold one over like a piece of pizza, grab it with a napkin, squirt a dollop of syrup or butter inside, and you’ve got a perfect grab n’ go breakfast or brunch.

I also really appreciate the moat around the edge of the waffle iron, which catches any stray batter that might fall off and cooks it so it’s easy to clean up afterwards, or even slip into your folded waffle if you want.

The indicator that shows what level of doneness the waffles are at during cooking is a nice touch, too.

This one is perfect for large families who want to get their waffle on together or for brunch gatherings.

While most Belgian waffle makers only have one waffle iron and so can make four waffles at a time, this model has two trays and can make eight at a time. The two irons are stacked on top of each other, and there is a handle to rotate the device and put either iron on top, allowing for easy access.

Of course, being a Cuisinart product, the waffle maker looks nice and simplistic even though it’s a sort of complex machine.

This Belgian waffle maker is half the size of most full-sized models, and it makes two square waffles at a time instead of four.

It’s excellent for someone who lives alone or who knows they’ll only be cooking waffles for one person. It’s also more portable and easier to store than most Belgian waffle makers since it’s smaller.

The machine also makes especially crispy waffles, thanks in large part to its steam release system that prevents any condensation inside the waffle maker while cooking. 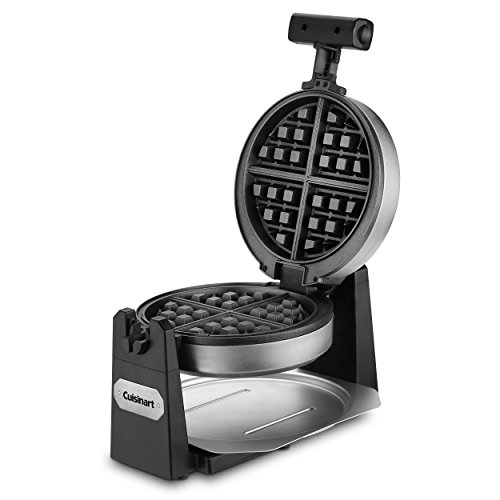 For around $60, this is a solid Belgian waffle maker. It doesn’t compromise on flavor or texture, keeping the normal 1-inch depth and the large “pools” that are customary for Belgian waffles.

They nearly always come out thick, crunchy, and evenly cooked. Many budget kitchenware products skimp on the nonstick coating, but I find this model is just as easy to clean as even the most expensive Belgian waffle makers.

If you’re looking to save as much money as possible while still getting something perfectly passable, this one is a steal.

How to Make Belgian Style Waffles

Pancake mix should not be used for waffles at all, because it is too runny and will come out the sides of the waffle iron.

The best solution is to whip up a Belgian waffle batter from scratch. I’d recommend this recipe for easy and fluffy Belgian waffles.

Belgian waffles are easy and delicious additions to your eating schedule. If the batter is prepared correctly and high-quality ingredients are used, the waffles will be healthy and full of nutrients.

They’re easy to make and will keep you from consuming unhealthy snacks in the late morning. In short, they can be the perfect bridge between breakfast and lunch.

I hope the recommendations in this post help you step up your brunch game and maintain a healthier eating schedule while still enjoying sweet and savory flavors throughout the day.